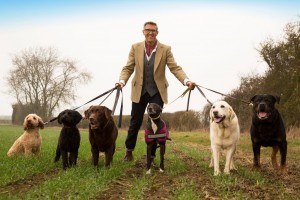 Here’s what Channel 4 has to say:

Dogs Behaving Badly will follow Graeme Hall, The Dogfather, as he answers calls from desperate dog owners who need help with some of the UK’s most mischievous mutts. Taking the lead is Addie, the jealous Miniature Poodle from Weymouth with a huge grudge against his owner’s boyfriend; Rome, the out of control 71 kilo Great Dane from South Shields; Gus a food stealing, escape artist Labrador who can open any door, from Warrington. Over in Liverpool, Winston the battling Bulldog locked into a battle for territory with Dexter the raging Westie.

Armed with over 10 years of training, the equivalent of approx. 70 dog years, Graeme has helped train over 4,400 canines and their owners. With his specific approach of combining knowledge and understanding, he gets the results the owners want for their dogs. That’s more than knowledge – it’s a feel for dogs.

Jamie Isaacs, Chief Executive of Avalon Factual Television said, “Graeme is a brilliantly talented guy with loads of Northern charm. At a time when dog ownership is soaring, his no-nonsense remedies for problem pooches and their desperate owners are just the tonic.”

Dogs are the UK’s most popular pet but when a man’s best friend becomes an owner’s worst enemy, there’s someone you can call….Graeme Hall is “The Dog Father”. As one of Britain’s top dog trainers, Graeme has built his reputation on finding quick but long-lasting fixes to almost any dog behavioural problem. His mantra is clear “Any Dog, Any Age, Any Problem”. Dogs Behaving Badly is a one off, 60-minute documentary commissioned by Channel 4.

Graeme has asked that you share your thoughts and let him know on social media.

Everyone a Anstee & Co will be watching and we wish him the best with this new venture.