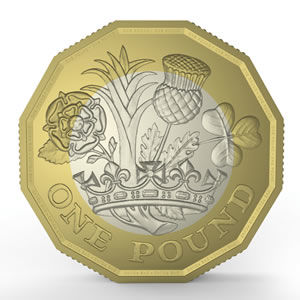 Why is the £1 coin changing?

This is the first change to the coin in over thirty years with the aim to prevent forgeries. This has been a problem in the past with an estimated one in thirty being counterfeit, according to the Royal Mint. The new coin is marked with two metals. A gold-coloured nickel – brass on the outside and a nickel-plated alloy on the inside. The coin has a hidden security feature. Six of the twelve sides are grooved with the coin being slightly bigger but thinner and lighter. The Royal Mint claim that the changes makes the coin one of the most secure in the world.

What to do with the old coin?

From now until October 2017 both coins will be in circulation and legal tender. The Royal Mint estimates that it will take up to a month for the new coin to become widespread. From the 15th October 2017 the old coin will no longer be legal tender and not accepted in shops. You will after this date however, be able to exchange them at your high street bank.

The one pound coin has always been a favourite to save. So checkout those piggy banks, whiskey bottles kitchen, money box and under the sofa so that you are not left with the old coin once they are no longer legal tender.

You might wish to structure your savings a little more tax efficiently in a new ISA (Individual Savings Account) especially now that the government have made them even more attractive. To find out how Anstee & Co can held, contact us today. We have offices in Kettering, Stamford and London. We also have meeting rooms in Bedford and Warwick.