Charity Golf Day goes with a swing & helps the community. 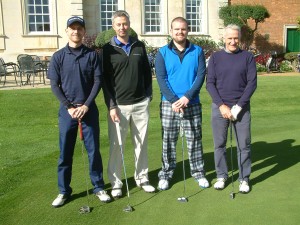 Our third annual charity golf day was hosted by Wellingborough Golf Club. The event was again well supported and built on the success of the previous years. Although the course was undergoing some major bunker, the temporary greens added to this already challenging course.

Despite the rain and high winds during the night the grounds staff worked hard to ensure the course was at its best.

This years charity is SERVE.

This year’s chosen charity is Rushden based SERVE. SERVE has been supporting independent living in East Northamptonshire and further afield since the 1980’s. Their mission is to ensure that everyone who wishes to remain in their own home, irrespective of their age or disability, is enabled to do so.

Caroline Anstee from Anstee & Co thanked everyone for attending and being so generously when buying raffle tickets. The “hole” sponsors were also acknowledged. A bouquet of flowers was presented to Jane Lumley-Walker and a bottle to David Wylie in acknowledgement of their help in making the day run so smoothly.

Before the prize giving, Jenny Standen from SERVE, talked about the work and support that the charity offers to people in the local area. She explained how they provide a range of services to help people stay fit and healthy and enjoy the independence that living in your own home provides.

The raffle and a silent auction of a prize donated by Mel Hubbard, together with generous donations helped to swell the funds raised.

This year’s winners came from a team made up from Brooks Macdonald, Investment Management Company and TSB Bank.

First place Brooks Macdonald & TSB with a score of 88.

Second place Bewers Turner Accountants with a score of 83.

Third place Varney Barfield & Co. Accountants with a score of 82.

Prizes were also awarded for closest to the pin and longest drive.

Next year’s event will again be held at Wellingborough Golf Club on Thursday 4th October 2018. If you would like to enter a team, sponsor a hole or be considered as the charity then please contact us at the Kettering office.

To find out more about Anstee & Co.’s work in the community please view our website pages.